The House of the Dead 2 is a near-flawless PC conversion of the hit arcade game of the same name. 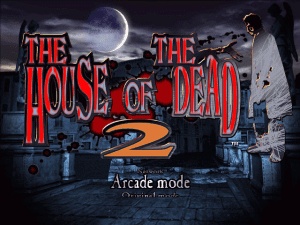 The game is a rail shooter like the first game, i.e. you are led by the game down a path similar to Rebel Assault, shooting at zombies and other monstrosities that get in your way. Although the English version that is being distributed by Empire Interactive unfortunately doesn't ship with the PC gun like its Japan counterpart, HOD2 still manages to be a fun and addictive FPS that everyone should enjoy. 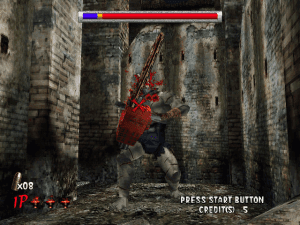 Similar to its predecessor, HOD2 is not a shoot everything in sight game. You have to be careful not to hit any innocent civilian, and rescuing them from the clutches of the monsters often rewards you with power-ups or, better yet, new paths to follow. This makes the game somewhat replayable as you can do something different (e.g. saving someone's life as opposed to watching him die in the last game) to open up new branches.
As well as the original arcade modes, there is plenty of extra effects. There are 5 game modes including Arcade and Boss, 12 different kinds of zombies including the chainsaw wielding Max and the disgusting Ebitan. End-level bosses are appropriately difficult to kill, although some of them are far too easy to dispose of once you find their weak spots. 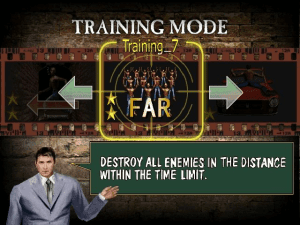 With an excellent co-operative multi-play option (across LAN) and 6 chapters of mayhem, HOD2 is a much more attractive, varied, and longer game than the original. Be warned, though: near-superhuman reflexes and tenacity are prerequisites to finishing one of the best rail shooters ever made. There are even plot twists to keep things interesting, as well as multiple endings.

House Of The Dead 2

WinMount avoids to decompress and compress again files when it is necessary to extract info inside them. It's easy to mount a file on the virtual drive, you'll only have to drag and drop the file you want to mount, as if it were an usual drive.

Let WinMount do the rest. No problems for you. Finally, thanks to WinMount you'll be able to create virtual drives from BIN, MDF and MNT; and generate RAM drives.
Features - support Windows2000/2003/XP/Vista/Win7/PPC

* Mount RAR/ZIP/MOU to virtual disk;
* Feature: no decompression, all actions are taken in a virtual path, protect hard disk, save space.

* A new storage HDD format that developed by WinMount.
* 1: Can be encrypted.
* 2: Have read-only and write-back mode.

Download for 64-bit  Download for 32-bit
All 64-bit version program is recommended for most computers.
Older machines with less than 2GB of RAM may only be compatible with the 32-bit version.