The House of the Dead is a "rail shooter" - a kind of game I have not seen before on a PC platform although it is well known for arcade fans Download Now. 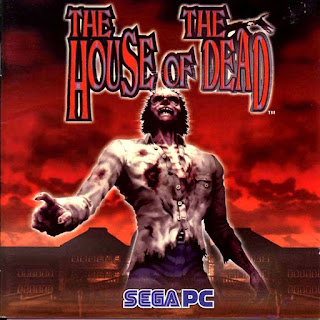 For those of you who aren't familiar with the expression "rail shooter": unlike the usual first-person shooters such as Quake, Doom and so on, in House of the Dead you are not able to choose the directions yourself, only where the game wants you to go. So all that is left to you is shooting on anything that moves :-) Think Rebel Assault on foot, and you'll have a good idea of what HOTD is about.

The story is rather simple. Your girlfriend Sarah leaves a message on your answering machine, telling you she has been captured by a guy called Curien. You, being the chip of the Hero, want to rush out to the place in order to free her. That is where the game begins. As you are 'led' by the game around a place overcrowded with zombies and monsters of all kind, you will constantly be busy shooting, no more, no less. Even though the only weapon you have is a plain 9mm-pistol, that thing obviously leaves holes in bodies in gory manners that are definitely not suitable for kids. Let me say this way: "losing your head" gets a whole new meaning when playing The House of the Dead ;-) 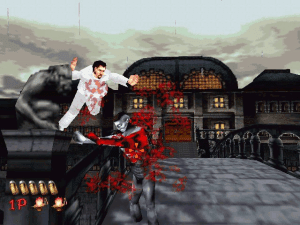 There are quite a few options to toggle. The game plays as well with or without Direct-X support, depending on the options you select. The graphics will remind you of Alone in the dark and similar games, but with more detail. German Authorities (and most likely other as well) will be glad to hear that you can alter the color of blood in the game (yellow, blue, green, red). You can also choose from several gameplay modes, chiefly "arcade" which gives you fixed settings you cannot alter, and "PC mode" where you can choose your avatar, and along with him alter the damage he does as well as the chamber-size of the pistol. The "Reload" option of the gun can be switched on and off, and the lives you have can be set from 1 to 5. The game also features the "Boss-Mode" where you can train only the bosses at the end of each stage. 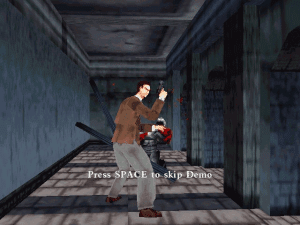 You have to fight your way through 4 stages, at the end of each awaits some sort of boss ...so nothing really surprising here either. While fighting the bosses of the first 3 stages you get a firm information sheet where to shoot to harm your opponents. The 4th (and last one) just offers you an "unknown type" so you have to find out how to defeat this one yourself.

As you can tell by now, its a rather common and 'uninteresting' implementation of an usual setting. What makes HOTD more challenging and unique compared to other shooters is the fact that you have to be careful not to shoot innocent civilians. If you accidentally shoot them, it will cost you a life. On the other hand, rescuing them (by shooting the monsters around them) will get you an extra-live as well as increase your score, or can open up optional paths. Therefore, although HOTD is a rail shooter, it offers a certain amount of nonlinear gameplay. Some of the directions you can alter are quite obvious, while others are hidden behind trapdoors. Also bonus-gems (why these had to be frogs only SEGA will know) can be found hidden within the game.

The House of The Dead