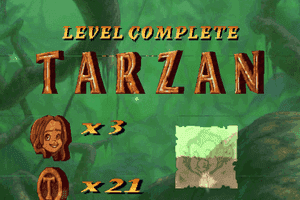 While Disney's animated adaptation of Edgar Rice Burroughs' Tarzan of the Apes' may have failed to capture the magic that made it one of the greatest novels of the 20th century. The video game adaptation of the Disney movie offers a more than serviceable action platforming experience. 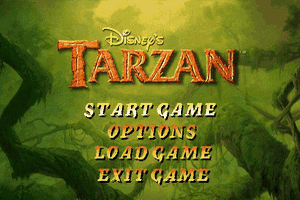 Run through the jungle, collecting tokens and fruit while avoiding enemies in this regard, Disney's Tarzan is very similar to the Donkey Kong Country games. Though Disney's Tarzan is fully 3D rendered, and there are some curling and curving side paths, Tarzan is a relatively linear 2D platformer. And that's OK! You can race your way through the somewhat lengthy levels. Jumping through trees and swinging from vines quickly or you might take a leisurely (or thorough) approach. Finding all of the items and secrets each level has to offer.

While Donkey Kong Country's jungle runs may be brutal and unforgiving. Tarzan puts a greater onus on level length than deathtraps and dirty tricks to stretch out its playtime. To be sure, there are some hard spots, but it's difficulty rarely feels "unfair" for instance, nothing in Tarzan is comparable to The Lion King's nightmarish "Can't Wait To Be King" level. 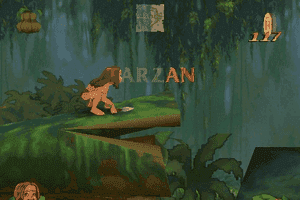 Everything in the game is brightly coloured and well-rendered; much of the CG looks almost animation-quality. It's definitely no shovel-ware. There are a few qualms I have with this one, though. You'll get tired of hearing Tarzan's beast cry (especially young Tarzan's beast cry) very quickly. Many of the enemies weave in-and-out of the 2-D path, it can be hard sometimes to tell when one of the enemies is actually in your hit-plane. And the lemurs. Having actually worked with ring-tailed lemurs, I can tell you that they're less dangerous than cats. The notion that Tarzan, who tore apart lions with his bare hands. Fought against the agents of Stalin and led a crack team of African riflemen against the dinosaur riding serpent men of the inner earth. Could be hurt by a ring-tailed lemur is laughable!