Intel Plans Even Tinier Circuits in 2011

SAN FRANCISCO — Moore’s Law coming to an end? Not if you ask Intel, which announced Tuesday that it plans to offer chips based on a 22 nanometer process technology in the second half of 2011.
0digg
The 22nm chip packs in more than 2.9 billion transistors into an area the size of a fingernail. That’s double the density of the 32nm chips that are currently the cutting edge; most of Intel’s CPUs today are still based on a 45nm process.
Generally, the smaller the circuits in a computer chip, the more complex features the chipmaker can integrate into that chip. Small circuits also have the potential to increase the computing speed, but the tradeoff is increased power consumption, heat production, and — with very small circuits — increasingly large challenges in keeping the circuits electrically isolated from one another.
At the company’s developer conference here Tuesday, Intel President and CEO Paul Otellini (above) showed a silicon wafer containing the first working chips built on the technology. The 22nm test circuits include both SRAM memory as well as logic circuits that will be used in future Intel microprocessors. 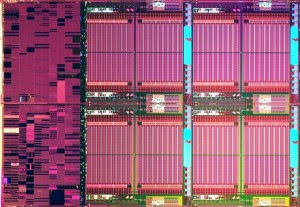 “We are moving ahead with development of our 22nm manufacturing technology and have built working chips that will pave the way for production of still more powerful and more capable processors,” said Otellini.
Moore’s Law, first introduced by Intel co-founder Gordon Moore in 1965,  postulates that the number of transistors on a cost-effective integrated circuit will double every two years. One way to describe how well transistors are packed is the smallest geometric feature that can be produced on a chip, usuallly designated in nanometers (billionths of a meter).
lly designated in nanometers (billionths of a meter). 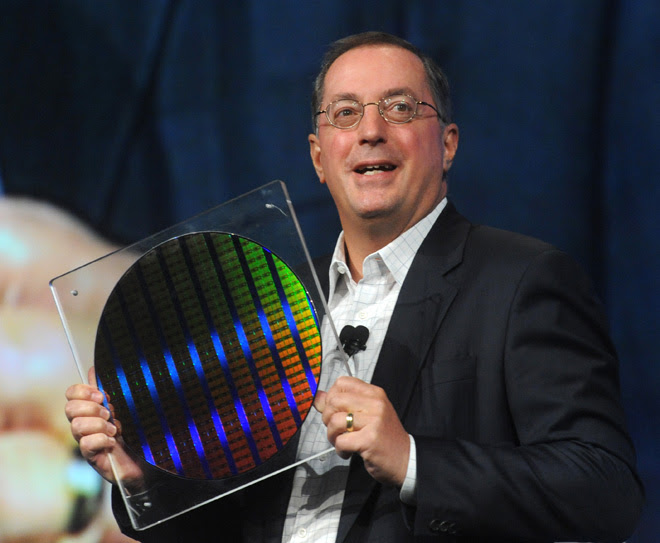 In late 2007, Intel started mass production of chips based on the 45nm technology. The company has said it plans to introduce 32nm processors early next year.  By comparison, the Intel 4004 microprocessor introduced in 1971 was based on 10,000nm process. A human hair is approximately 100,000 nanometers.
The 22nm wafer is made up of individual die containing 364 million bits of SRAM memory. SRAMs are used as test vehicles to demonstrate technology performance, yield and chip reliability. Once the technology works on SRAMs, Intel will move to utilize it in CPU production.
At 0.092 square microns, the 22nm process based chips contain the smallest SRAM cell used in working circuits ever reported, said Intel.
Email ThisBlogThis!Share to TwitterShare to FacebookShare to Pinterest
Newer Post Older Post Home